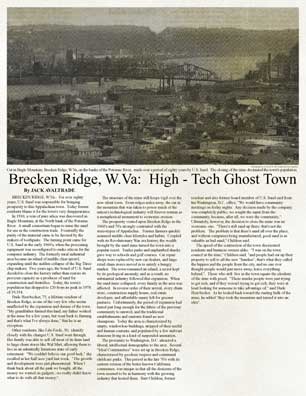 In 1910, in a little town in West Virginia, called Brecken Ridge, sand was discovered. Ordinary sand being common enough, the discovery was not regarded as particularly interesting or useful. However, this sand existed as a vein of pure silica of which an entire mountain was composed. The owner of the mountain (people used to be owners of entire mountains), being resourceful, was able to establish a mine which produced especially fine sand for the construction trade. Due to technological developments, the sand was eventually to become the favored variety for toothpaste, which actually resulted in an expansion of the mine. Over time, the mountain changed shape drastically, and was reduced to 2/3 of its volume at the inception of the mine. It was at this point that the sand became a primary ingredient for computer chips. The production techniques had changed very little over the mine's 50 years, and remained unaltered when the sand shifted to the computer industry. However, certain quality standards were imposed which neccessitated an alteration of the processing equipment, rendering it the most efficient silicon production facility in the world. However, these changes irrevocably eliminated the plant's ability to produce sand for its previous uses, i.e., toothpaste and as an additive for concrete. After the decline and collapse of the computer industry, the volumes of silica needed dropped enormously. The sand company's demise came about after a particularly bitter class action lawsuit brought by the workers and the town of Brecken Ridge. The litigants sought not monetary damages as compensation for environmental damage, lost jobs, and certain irregularities with regard to health codes, but asked simply that the plant be reconfigured to suit its original function. The stockholders determined that the changes to the facilities would be more expensive than the company could afford, and the entire operation was liquidated the moment the lawsuit was lost. As a result, Brecken Ridge became known as the first of the "new ghost towns" of the American east coast in the 21st century.

The prosperity visited upon Brecken Ridge in the 1960's and 70's strongly constrasted with the stereotypes of Appalachia . Workers quickly assumed middle class lifestyles and habits, and the town became something of a resort. Coupled with its Revolutionary War era history, the wealth brought by the sand mine turned the town into a popular resort. Trailer parks and unplumbed shacks gave way to schools and golf courses. Car repair shops were replaced by new car dealers, and large retail chain stores moved in to satisfy a hungry market. The town remained an island, a secret kept by its geological anomaly, and as a result, no substantial industry followed this expansion. When the sand mine collapsed, every family in the area was affected. In reverse order of their arrival, every chain store, construction supply house, real estate developer, and affordable nanny left for greener pastures. Unfortunately, the period of expansion had lasted just long enough for the fabric of the previous community to unravel, and the traditional establishments and customs found no new champions. Today the area is characterized by empty, windowless buildings, stripped of their useful and human contents, and populated by a few stalwart denizens living in a kind of suspended animation. Most of them don't even remember the prosperity the town once enjoyed, and many don't remember the town at all. 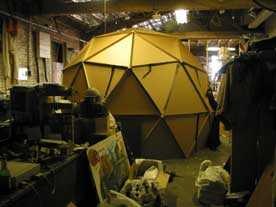 can you do some things for me?

1. tell me the name of this exhibition (very urgent, some print stuff to designers tomorrow)

2. send me any pictures you may have or can create of stuff related to the show.

3. Write some more words specifically about what you propose to do here - can be jumbled - for me to sort out into some sort of press release. I have only as follows:

you come into the space and are confronted with a geodesic dome which is elevated off the floor somewhat by a little wall structure. you go inside and its dark. its arranged somewhat like a planetarium, if a planetarium were a diorama. theres a little breeze, the moon is coming up, you smell pine trees and there are clouds moving around a bit on the horizon you can see down a hill to a small town. then after a couple of minutes these fluorescent lights come on and you see that the town is nothing more than some torn paper taped to lightbulbs, the clouds are bits of polyester on wires, theres an open fridge

supplying the fresh air, there are little contraptions laying around with tree branches and shit taped to them, and then the lights go out again and the nice little scene returns. All the shit would be made of found crap from around your place. Maybe out in the gallery thered be some propaganda promoting recycling and the touting the advantages of geodesic domes, all done up in 90s anemia.

4. tell me any news of transport issues.

5. any news of what stuff we need to start finding.
dom